My Own Personal Aunt Bee 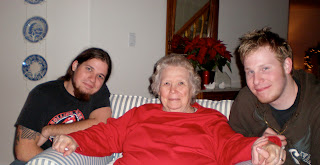 This weekend Hubs and I are hoping that the predicted snowstorm will not make us turn back from driving up to see his mother. She has been my mother-in-law for thirty-three years and she totally defies all the MIL jokes. There have been moments when Hubs felt that she loved me even more than she loved him! Before we were married she used to encourage him to talk to my sister and me. (I think that at that point either one of us would do!)
We have seldom lived in the same state as my in-laws so as my sons were growing up, the yearly summer vacations were spent traveling to Grandma and Grandpa’s for a week. These were fun and relaxing days of eating her amazing cooking and sitting around sharing funny stories from Hubs childhood.
I have two main memories from my very first visit to the in-laws as a new Bride. As we approached the front door all I could hear was ferocious barking from the small but sturdy schnauzer they called Radar. We could hardly hear the greetings of welcome as we were hugged and urged to come on in. Radar was beside himself with excitement and was barking and jumping all over the place, and that is when IT happened!
The dog got out! Off he went in a frenzy of freedom covering several blocks in minutes. I stood there amazed as Hubs, his dad and sister all tore off after the dog, calling out his name. That is when Hub’s mother looked at me and said, “Well, go after him!”
The last thing I wanted to do was run around a strange neighborhood calling for a strange dog. It felt so weird to be given this instruction as part of my first time in their home! The second strange direction I was given on this visit was a precise lesson on how to squeegee the shower stall after each use.
But today as I am reminiscing about these moments that seemed so odd to me at the time, I am realizing that these were actually the ultimate in welcoming me in as one of the family. I was no longer a visitor in this home; I was the newest family member! These were expected responsibilities of a family living together. That makes me smile. 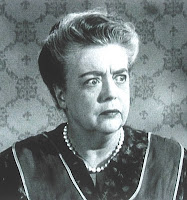 I think my mother-in-law has a famous twin, Aunt Bee from the popular Mayberry RFD TV show. She looks like her, talks like her and nurtures everyone around her just like Aunt Bee. (If you are reading this Mom, please know that Aunt Bee is my favorite character on the show and this is not meant to offend in any way.) She always loves unconditionally and loved to feed everyone who came to her door. I am thankful for our own personal Aunt Bee.