Yes, I Am Thinking About Christmas BEFORE Thanksgiving! 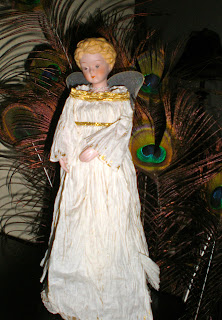 Isn't she wonderful? This angel has visited Walking Butterfly Blog before. I made her a few years ago and made them for all my neighbors the same year. I love her and I am super excited to make one for Sassy Bride and Tattoo Girl this year!  So, so excited!
I am very tempted (and will probably give in) to add a tiny tattoo on the hand or shoulder of Tattoo Girl's. Wouldn't that be the best? Ha! If I could color the hair pink without ruining it I would try that too. For Sassy Bride's angel I am going to use some left over ribbon from the wedding!
These angels are super easy and do not involve any sewing because the dress is craft paper. I love that. Just a glue gun and go!
Any other fun Christmas crafts you guys are doing?

Posted by Brenda Susan at 4:41 PM 2 comments: Links to this post

Thanks for asking about  Rocker Son (25 yr) and his recuperation after getting hit by a car while going to work on his motorcycle in mid August. His femur has accepted the steel rod that runs down it and though it is still painful and he walks like an 80 year old man, we are happy that he is walking!

Due to a mess up with lack of insurance and a case worker that gave them bad advice, Rocker Son and his girlfriend could not get in to see any doctors for follow-up care of his leg and the cast on his arm. They finally removed the cast themselves and the arm and pinkie finger are fine.

But all along since the accident his other wrist had been slightly tender and swollen. The hospital said it was sprained and would go away on it's own. They x-rayed it and confirmed that.

Two weeks ago they had it looked at again because he could not bend his wrist like he used to. They discovered that he had sustained a very rare disease called Keinbocs Disease. It could not have been diagnosed earlier because the symptoms do not show themselves for several weeks.

Now according to the doctors, this injury is actually his MOST serious from the accident!! Argh! The impact of the trauma to his hand caused the blood to stop flowing to one of the large platelet type bones in his palm. Without blood and nutrients going to the bone, it has shrunk and is causing his hand to turn in on itself and could become fused to itself if he does not under go some experimental surgeries that involve removing several bones and replacing them. Again I say ARGH!

Yep, fun stuff. He is pretty much impossible to discourage, he just shrugs his shoulders and says, "whatever"! Crazy kid!
Thanks for your prayers and good thoughts!

Posted by Brenda Susan at 9:02 PM 5 comments: Links to this post