Downward Dog
Recently a doctor visit gave me some real motivation to get serious about getting myself healthy through more exercise. My husband & I actually walked in the park twice a day for a whole two days in a row….but I got blisters on my heels & could not continue our well intentioned regimen, long-standing though it was! 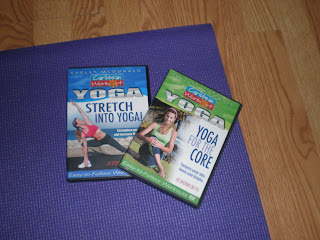 So I have come back to my favorite way of getting a work-out though I still need to add some “cardio” to it according to my health-crazed friends. YOGA! It feels great & it is more challenging than you may think. I use a DVD set that I found in the $5 bin at Wal-Mart. The teacher is Shelly McDonald & I was relieved to hear that her voice is not as high-pitched & overly cheerful as some I listened to online. Can you imagine starting your day getting screeched at? No thanks. There are some definite pros & cons for using a video instead of going to a class or gym.

Pro – A video is much cheaper than a class. Can’t beat the $5 bin at Wal-Mart!
Con – I have now memorized every single comment & joke she makes. And every mistake. “Cross your left ankle over your left leg”??

Pro – You do it alone. No one is looking at your butt while doing the downward dog.
Con – You do it alone. I went to a yoga class for a while & the laughter & communal groans are encouraging. Going out for ice cream afterwards is always a treat too!

Some of the things my teacher says make me answer her back & roll my eyes which could be considered exercising my eyes right? For instance;

“Yoga is about the journey, not the result.” Umm no, I can think of many things I could be doing right now that have nothing to do with “Being a tree growing towards the sun.”

“Yoga is all about the here & now.” Well, for me it’s about looking better in a swimsuit & not losing my breath on the stairs at work. 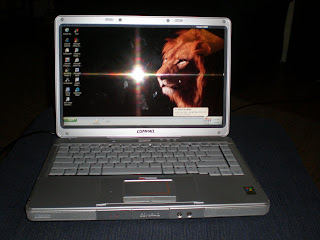 Another Pro - I can do it anywhere & any time of the day I choose, all I need is my laptop.
The Con – My lap top is extremely distracting. I often end up doing the warm up stretches while reading my Myspace messages. Is that wrong?

She also says, “Place your feet not too wide apart; just as wide as your hips.” That one always makes me laugh!! Has she seen my hips?

“Now send your breath to the back of your thighs.” Huh? Go breath go! Get back there, I mean it! 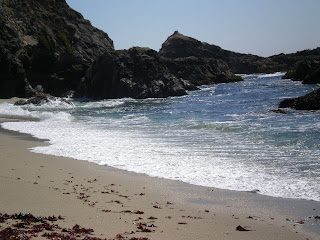 ocean or a gecko on a tree. That means she has me holding a hard pose for a looooong time! Like the one she calls “a fierce warrior position” which is actually a squatting pose that reminds me of using the squatty potty on the moving train in China. Not a peaceful memory! I get a picture of the Chinese man who leered at me when I passed him to enter the bathroom during the night on the train. I had my socks on because I had been in my bed & as I stepped into the tiny room I realized why he was snickering at me. The floor of the entire bathroom was extremely wet due to some people with really bad aim! Peaceful, tranquil thoughts people!

Shelly McDonald also has to remind me to get my heels to touch the floor. Who ever would have thought that getting your heels to stay on the floor would be so hard? But ouch, that “downward dog” feels so good but can hurt so bad!

Speaking of feeling good; my favorite phrase she purrs to me is this one;

Posted by Brenda Susan at 3:43 PM No comments: Links to this post

What Would The Last Blog You Write say? Recently Professor Randy Pausch died after becoming famous for giving a speech called "The Last Lecture". I began to wonder what I would say to the world (or my 3 readers) if I knew it would be the very last blog I would ever write, the first thing that came to my mind was "HAVE MORE FUN!".
I would want to tell people to let go & have lots of fun because I am regretting all the chances to be crazy that I missed due to fear. Fear of looking silly, or being wrong, or getting lost, or getting hurt, or.......on & on it goes.
I would want to tell Christians especially, to lighten up & find the humor & freedom that God is full of & wants us to wallow in everyday. I know now that he laughs much more than I ever imagined. I know now that he would not have been mad at me if I had gone to my school proms & dances. ( I grew up in a strict tradition that included no dancing .Dancing could lead to sex & we know he hates that!:) He would not have been dissappointed with me if I read a book that was not all about Him. He even enjoys all kinds of music! Duh!
I would tell my readers to take risks, spend time with little kids & old people, go to the beach on a Sunday even if it means missing church. Try out your old dreams. What did you say you wanted to be when you were 8? It could still be do-able. Stick your tongue out if you feel like it. Let someone else get credit for your work; your time will come. Write the book, record the song, paint the picture, dance the dance. Worship with abandon, why not?
Seriously, we have taken ourselves so seriously that we have been robbed of many amazing adventures.
I do not want to be twenty again, but if I were, it would look very different I think. I would wear more spagetti straps & do more swimming. I would laugh louder & cry more freely. I would risk entering new atmospheres instead of fearing them. I would affect them instead of being convinced that they would contaminate me.
My last blog would encourage everyone to go ahead & laugh at yourself & invite others to join you. It would say to jump into the ocean & allow it to throw you back up to the shore. Laugh at the taste of salt water & get used to sand in unseen places. In case you don't recognize them, the sand eaters up above are my friends Dano, Dave, Bob & my husband Curt! I only did it once!
Posted by Brenda Susan at 8:04 PM 6 comments: Links to this post