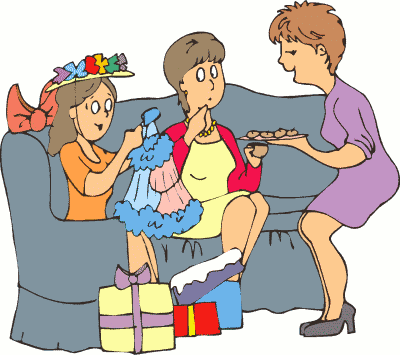 The earlier mentioned Lingerie Shower was a really fun & silly evening after all. There had to be at least 40 women in that house, filling every couch, chair, dining room & livingroom. We were on the stairs & up above the crowd on a second floor loft!

After a wonderful snack of the ever-popular seven layer dip & chips, amazing guacamole, salsa & the yummiest little torte thingies along with punch, sangria or margaritas, the girls all went outside to watch the bride-to-be hit a pinata! (Condoms & candy could come in very handy!)

Gift opening began with the explanation that the undies & lingerie were going to be hung up around the room after being opened & at the end the bride would choose her favorite & that gift giver would get a prize! I think it may have been their own made up game because to me it seemed a little awkward to be rooting for your gift to be her favorite. Talk about competition! But it certainly made for an interesting decorating theme by the end of the night!! I was sitting on the stairs & had to peek between a pair of plaid skirted panties & a gorgeous lemon yellow see through nighty to watch the bride open the rest of her gifts!

The adorable Bride remained pretty unflustered by the sexy packages she was opening, which included 3 books on creative ways to have an orgasm, flavored nipple cream, a huge bottle of chocolate syrup & thong after thong after thong! Ha! I really loved the beautiful & fun nighties though! So many luscious colors & fabrics. It made me picture my ugly tank top that is my only sexy nightwear. I heard someone say that we ought to require a Lingerie Shower every 10 years at least! I agree!
The funniest thing to me, besides the fact that those orgasm books never made to me as they were passed S L O W L Y around, was that the bride only got embarrassed in an obvious way at one gift. It was not any skimpier than the others, just a cute baby doll nightie with a string like bottom pantie that she held up for all to see. As she held it up she asked who it was from & a voice back in the kitchen called out that it came in the mail from her mom who lives out of state. Oh my gosh, did her little face turn bright RED!!! 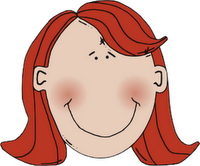 I guess the idea that her own mother bought such a thing for her was really embarrassing. That cracked me up! Do they think we stop living once we hit 45 or what?