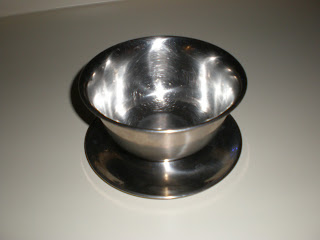 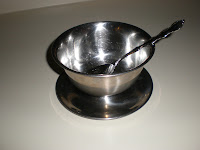 A few weeks ago while we were sifting through my mother-in-law's belongings, trying to divide the contents up between the family and figuring out what needed to go to the goodwill store, Hubs put this item in our box.
It was covered with dust and had a few paperclips in it. I wondered why on earth he wanted to bring that home with us. We were 600 miles from home and had to fit our choices into a small car with four adults in it. But I did not ask at the time, I figured he had his reasons.
At home I washed it and put it on the kitchen counter for a few days, then last night I put it out with black olives in it. It is not very big, about the size of a cereal bowl and it's all one piece of stainless steel.
Hubs pointed to it later in the evening and said that he had given it to his parents for their 25th wedding anniversary. He smiled and said that he was in Junior High at the time. It was a gravy boat with a ladle. He remembers being so excited to watch them open his gift, he was so proud of himself. He thought it was made of silver for their Silver Anniversary!
I love that story and I'm so glad he saw it and brought it home with us.
+++++++++++++++++++++++++++++++++

Today Hubs saw me at my laptop and said, "Wow, you really look like a writer today! All you need is this pencil behind your ear, where's the camera?" 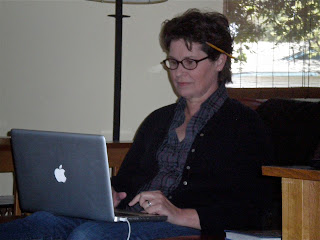 Thanks for the compliment Honey!
Oops! I forgot to tell you that i have put up a new post on GoodBlogs called, "I Am My Own Michael Scott". It could use some more votes to move it to Top Posts and add a little gold to my pocket. Thank you!