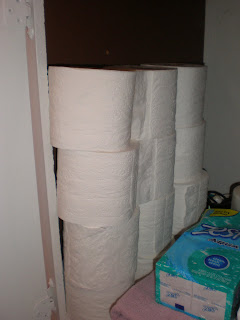 Next month Hubs & I will be celebrating our 32nd Wedding Anniversary. I know, that's a really long time isn't it? Especially when you consider that for two thirds of that time we have worked together all day, side by side!! Now you can truly be amazed huh?
When we first married, I moved into his tiny studio apartment that an elderly couple rented to him. It was a re-modeled basement & very small. So small that our bed was the fold out couch right by the front door. I could probably answer the door while still in bed! I do recall the bathroom door banging my knees when sitting on the toilet! (Ah good times!)
The photo you see here is my current bathroom cupboard with some nice stacks of toilet paper. This sight always triggers a little memory from those early days of our marriage; our apartment had a door that opened into the old couple's garage storage area. They had built some huge floor- to-ceiling shelves that held stacks & stacks of canned goods & other non-perishable foods. The shelves also held towers of toilet paper packages. In my memory it seems they were as far as the eye could see but of course some memory-exaggeration is going on there!
Hubs & I were just so impressed with that huge bountiful supply they had! Having very little money we were barely getting by & always running out of things & scraping up just enough to get the essentials. To see such an unending supply of TP was like a symbol of wonderfully extravagant living! It was our goal to someday be able to do that! :)
I realize that it probably cost them less to buy it that way when they found good sales, but we were not in a place to even enter one of those big warehouse type stores, in our minds anyway. It appeared very abundant & lavish to be able to purchase that much of one thing when it was not needed that minute.
I do not have shelves full of future supplies even now, though I could if I wanted to. I feel generous when I buy two 24 roll pacs of TP at once. But neither are we digging into the couch cushions to find enough change for a soup dinner like we did in that cozy studio apartment. When I open that bathroom cupboard, my mind often goes back to that old couple's supply & beautiful organization. It's funny how a current scene can take you back instantly to a past scene.
Do you have that experience?