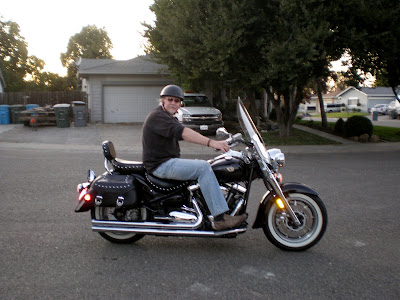 Even though Hubs violently refused to watch "Confessions of a Shopaholic" with me, he has more than a little bit in common with the main character! He is a SHOPPER, but unlike her, he is not much of a BUYER. He just really enjoys the hunt & the excitement of finding an amazing deal. eBay was made for him! He has clothed himself with eBay finds & managed to buy our first bike & all it's extras totally from eBay hunting. So yes, he does sometimes actually part with the bucks in order to snag the shocking deal of the century, but not in a habitual or negative way.


These pics are of our SECOND MOTORCYCLE! Another great deal, this one found through Craig's List. We have been longing to take some longer over-night trips & the first bike was not made for long rides with 2 people. This Yamaha Road Star is way more comfy for me. Floorboards instead of just pegs & a wider (snicker, snicker!) seat for my wider seat. Ha! And it has all those yummy cargo bags so I can actually take more than just what I can fit in my pockets now!! Learning to leave the house without my purse was a huge hurdle to jump over when we first started riding! Such a woman! There are also 2 more matching bags that can be strapped on the bike behind me. 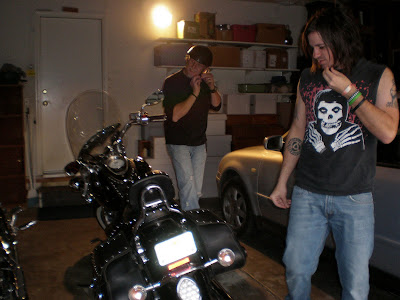 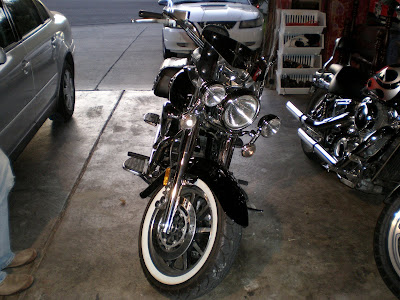 That is Rocker Son with Hubs checking out the bike the first day we brought it home. He approves & is probably devising a way to get his hands on it sometime.


I have found one little bug-a-boo with this bike though. See those big side bags that I was so happy to get? And that nice back rest for me? Well, in order to get myself on the bike after Hubs is seated I must raise my leg up & OVER like getting on a really wide horse. But the horse would not have a high backrest to reach beyond. Not a problem with the bag-less bike, but I guess the extra width of those hard sided bags is adding a bit of major stretch to the job!


Back to the YOGA workouts for me!
Posted by Brenda Susan at 3:24 PM