I've Been Married How Long??? 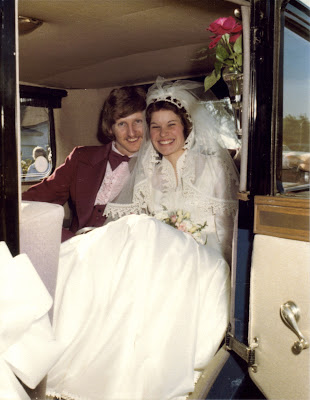 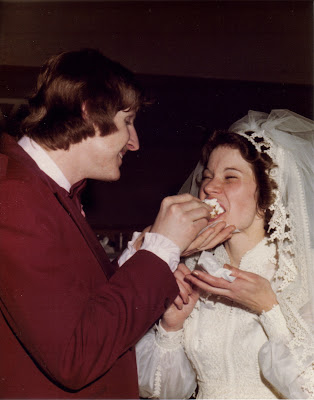 Today, February 18, is our 32nd Wedding Anniversary! And yes, the photos are undeniable evidence that we were married in the 70's & that I made poor Hubs were maroon & pink! It is truly amazing he did it....especially now that I know him so much better! How in the world did we (mostly my mom!) talk him into that? I am full of regret about that choice & wish I had photos of my handsome man in a black tux. Hm.....looking at the cake pic just now....the look on his face could be tied in some way to what we made him do. He's enjoying that entirely too much!
I do love my dress though. It was a gorgeous off-white heavy lace trimmed thing of beauty. After going to so many weddings of our young students lately, I see that my dress is a whole lot more material than the modern ones now. Most are off the shoulder & low-cut, which is very pretty & sweetly dramatic. I did not have enough "up there" to keep a dress like that up though, so it would have made me way too nervous!
February is fun around here & love is definitely in the air! And THAT is all I'm going to say about that! (For now!!!)