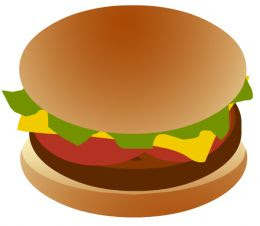 I have just finished off one of my favorite summer meals, at least the fav thing that I can make at home! Angel hair pasta with yummy veggies on top! Yep, that IS what I love best. Now Hubs is sprawled out in front of the TV watching a show called "Man vs Food" It is one of the most disgusting shows I have seen & that's saying something, because after raising 2 boys I have seen some pretty gross shows!

The whole point of this brilliant TV concept is for this guy (Who is not exactly skinny) travel all over the world eating or trying to eat world record portions of food. He visits those restaurants that challenge the customers to eat a certain humongous size dish & they get a prize, which is usually just their picture & name on a bulletin board. Tonight the guy attempted to eat a FIVE POUND burger with 10 slices of bacon & cheese on it along with FOUR POUNDS of fries! The 5lb burger is actually about 8 or 10 separate meat patties stacked on top of each other. It is so tall that they skewer it with 2 long chopsticks to hold it together.

I just do not GET it. Why do that? Why stuff all that junk in you for no good reason other than having strangers cheer for you? Just don't get it! It can't have much to do with the TASTE of the food, because at some point I am sure the food in question becomes pretty sickening to the eater, right? Again...I don't get it!

I really, really HATE that overly full, stuffed feeling after a meal, even a good meal that I totally enjoyed. I always wish I had stepped away from the table a bit sooner. Ugh, the tightness of the waistline in your pants, Oh that is horrible! I can only imagine what that guy on the TV show feels like after each show taping. The piles of food they show on screen is enough to turn me into an anorexic.

There is actually no danger of that happening though because I do love good food. I don't know how to prepare good food, but I love it anyway. Pasta & veggies is good & it is easy enough for me. I dislike spending time in the kitchen. It just bores me & I get distracted & forget to watch the pan & I hate to try to figure out when something is "done". The recipe will say "simmer until done" or bake until done." Umm that does nothing to help me at all! Give me an exact time measurement & if it is still too pink I can blame it on the recipe!

But I am looking forward to watching the new movie about Julia Child called "Julia & Julie"! Watching...that I can do! And I am pretty sure she is not going to force someone to eat a 5 pound hamburger!
Posted by Brenda Susan at 7:44 PM