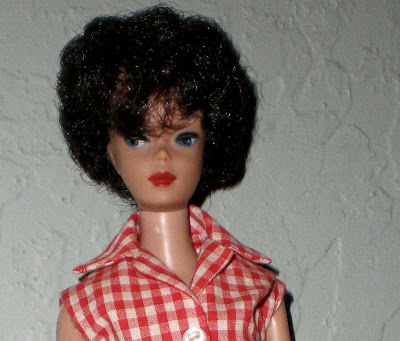 Could Barbie really be fifty years old? I keep seeing headlines & articles saying it is true but she certainly is holding up well! Maybe a bit of plastic surgery along the way, that's what I'm thinking. So I did some research & yes, she was invented in 1959 & changed the doll industry forever. Before her birth most dolls for little girls were baby dolls. She changed our way of playing & a few days ago I stepped back in time for a while in the privacy of my bedroom while my hubs watched men beating each other up on TV.
I'd like to introduce you to my Barbie, isn't she gorgeous? She was given to me in 1962 when I was 7 years old. I love her bubble hair cut & recently learned that it was designed to honor then presidential wife, Jackie Kennedy! Last week I retrieved her & her Barbie Case from the garage & sat down on the floor of my room & had her give me a little fashion show of the few pieces of clothing she still owns. 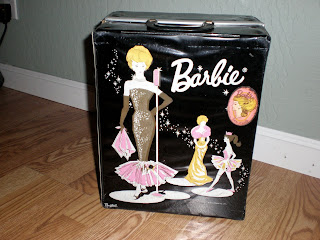 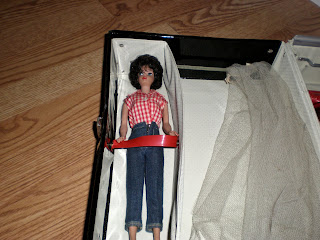 The wonderful memories of my afternoons with Barbie came flooding back as she patiently tried on her swimsuit & then her dressy coat for me. I remember riding my bike down to the opposite end of Arlington Drive to my friend, Ginger's house. I would carefully balance the black case & the handle bar in one hand & hanging onto her Dream House & handle bar in the other hand! OH, the dream house was amazing, I loved it so much! It was cardboard & folded out to a pretty good size house with separate rooms & little cardboard stand up furniture & stuff inside.
We would set up our houses so her Barbie & mine were best friends & neighbors, just like us! Of course we explained the absence of husbands by talking about how they were doing in Viet Nam. Wow, that tells you my era doesn't it? 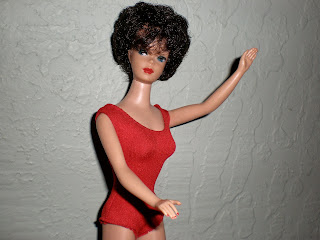 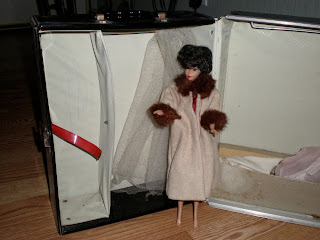 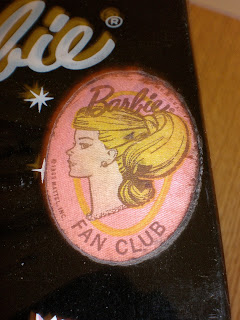 Speaking of a husband for Barbie, I never wanted a Ken doll for her, he was not very good looking to me. Not much personality, at least not enough to be worthy of Barbie! She was, in my imagination anyway, a strong, sassy but gentle woman who was always laughing & humble about her beautiful looks. I mean just take a look here at Ken, he looks like he could be her little brother or a pesky neighbor or something. Compare him to G.I Joe who arrived on the scene in 1964. Which would you choose? Joe has some character & personality, where did that mysterious scar come from, for instance? And those heavy-lidded eyes! 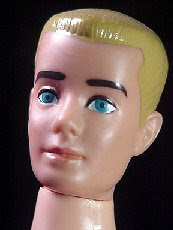 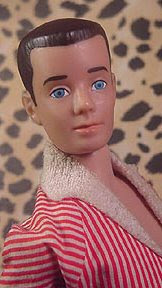 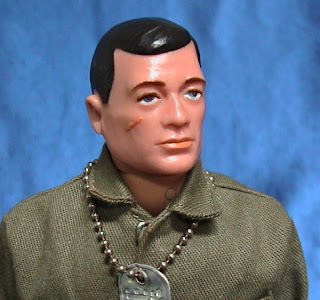 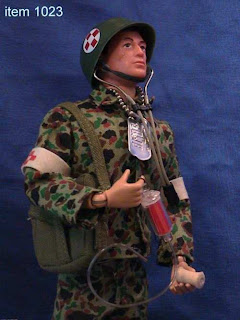 Looking at these G.I Joe pictures reminds me of my own son's action figures of super heroes & Star Wars characters. They hated it when I called them "dolls" or compared them to my childhood Barbies. I was supposed to call them "action figures" or just "guys"! I never bought them the G.I Joe figures because I really hated the idea of giving my boys military stuff in those days (remember I grew up amidst the Vietnam controversy!).
Barbie created some controversy of her own in later years. People have blamed her for causing eating disorders by showing little girls such a beyond-perfect body shape that is not realistic or achievable. I don't recall feeling that way, but that would be pretty hard to detect in yourself wouldn't it? I was a late bloomer in getting any shape at all, so comparing myself to her could have been a problem I suppose. In fact, it may be what's bugging me now as I am trying so hard to get in shape. Her waistline is pretty amazing & I am still wearing the same size bra as a pre-teen so really the only thing Barbie & I have in common is our dark hair! 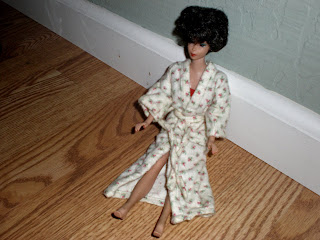 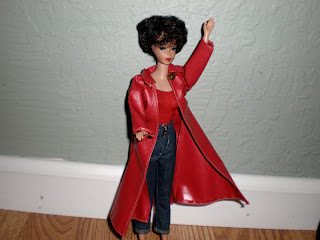 My fun afternoon of playing with Barbie came to an end as she let me know she'd had enough & waved me away, guess she was ready to be alone again in her shiny black case tucked away in the garage. Up there on the second shelf seems like a pretty dismal place for such a glamorous & important lady, but maybe she knows what an honor it is to be sharing the space with my husband's beautiful Shadow motorcycle! 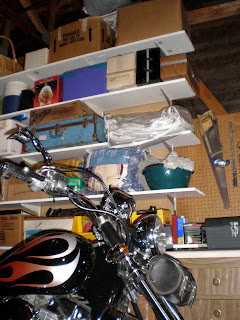