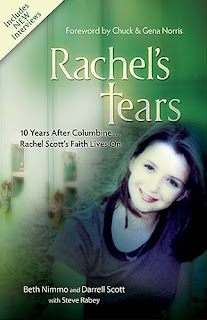 Book Review for RACHEL'S TEARS
Rachel Scott was one of the victims that died in the horrendous school shooting 10 years ago at Columbine High School on April 20, 1999. The small book is largely made up of this young girls' personal journals, doodles & letters to friends & family. It is a hard read for parents with kids in school but it does not leave the reader without hope. The authors are Rachel's parents & they share the writings of their daughter to show the world that she was a person of great faith & convictions.
There are a few hints that she may have been one of the targeted students due to her clear professions of faith.

It was, and is, not easy to be a Christian in a public High School. Columbine had the normal groups that students fall into but she managed to not get stuck in the"good kids" group & defiantly tried to be friends with all the groups in the school, including the goths & the loners. Friends told of her earlier attempts even to befriend Harris & Klebold the two shooters.

Her love for people & for God gave her great strength & confidence. She was very involved in many areas of school life, including the drama club. She loved the ethnic variety of her school & once wrote about how she suddenly looked around her one day at the lunch table & realized that she was the only white person in her group of laughing friends.

My only disagreement with this beautiful little book is the idea that one parent gives that this may have happened to Rachel so that God would get the glory as her story was told all over the world. I believe that God does turn things that were meant for evil around & make good out of them, but He had nothing to do with causing this tragedy to occur. But this book is not meant to be a document of theology & it is still an uplifting read as a memoir of a short but beautiful life.