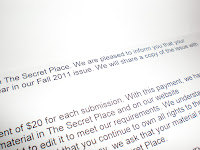 I was sitting on my bed having a good cry yesterday. My sister had called and reported that our mom's health was deteriorating rapidly and the doctors are strongly suggesting removing life support. We had already been in this spot a few weeks ago but then she had rallied and we were given just enough hope to fight for her life. But now it is real and it is happening.

Hubs came into the house after getting the mail and called to me that I had something from a publishing company. He came into the room and handed the letter to me with a small joke that it is my big book deal at last and I laughed with him.

I set it down on the bed and we talked a bit about Mom and our plans to go up to be with the family again. As we talked I opened the letter which I assumed was junk mail since I have subscribed to so many writer's market lists lately. 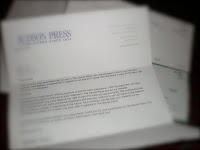 But then the words, "WE ARE PLEASED TO INFORM YOU......" jumped out at me and I screamed and shook the letter at him! It is my first ACCEPTANCE from a publishing place to include my writing in their quarterly magazine! I sent my little piece in last September and the letter was to inform me that it will appear in the Fall 2011 publication! Included was a check for twenty dollars. (Someday somehow, that number is going to move on up to $200 for a piece!)


Deep sadness and deep joy in the same moment......I know my mom would be so pleased for me.