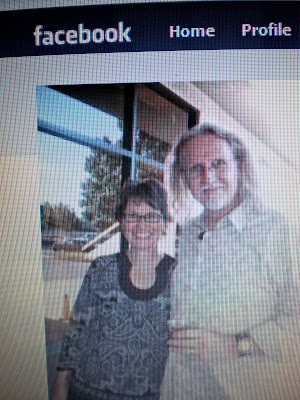 First of all, please know that I am not really complaining about facebook, not at all! I love it! But something kind of weird happened today & it has disturbed & amused me. As I told you in my last post, Writer Son has discovered that he loves his best friend & since they have been best friends for 3 or 4 years, everyone around here is rejoicing & saying "Well, duh!".

Hubs & I have been totally enjoying this development because we had her picked out as the perfect one for him for quite a long time. But they had to come to that for themselves & the last few days have been full of great chats with my eldest son & huge grins shared between Hubs & I. Now, here is where Facebook comes in & it gets weird.........

I teared up when they both changed their "Relationship Status's" on their Facebook pages! If you are unfamiliar, it changes from "Single" to "John Doe is in a relationship with Jane Lane". It was as if this whole new relationship was not real until it appeared on Facebook!! How messed up is that? It felt like that declaration for all the world to see was the proof that this is love!!

Facebook is also the reason I am getting reconnected with my cousins after 35 years. We are having a blast comparing old pictures & bringing up funny memories of our childhood summers together. It's been truly wonderful! This would not have happened without FB & I am thankful for this connection place.

But still, the idea that changing their relationship status on Facebook is the modern equivalent of declaring your love from the mountain tops is so funny to me! But I think it is true. That is a pretty big deal. Everyone you know; grandparents, friends, co-workers, enemies...everyone gets the news at the same moment. And then come the responses from all these people in your life. Writer Son got tons of comments (most pg rated) of cheers & thumbs up & "it's about time"! (My restraint will now be tested. As Mom, I don't want to get in there too much & embarrass him you know?)


My comments so far have just been really big smiles! :)
Posted by Brenda Susan at 5:57 PM